Four hotels in downtown Vancouver have won court orders to stop striking workers from using air horns, sirens, blowhorns and other noisemakers to draw attention at the picket line.

The Rosewood Hotel Georgia became the latest to win an injunction in B.C. Supreme Court on Friday. The Hyatt Regency, Pinnacle Hotel Harbourfront and Westin Bayshore each won respective orders on Oct. 3.

The latter three hotels sued the workers' union, Unite Here Local 40, first over the "nuisance" the noise created. The businesses claimed the noise was deafening, intolerable and in violation of city noise bylaws.

Hotel Georgia filed its own, similar claim soon after.

The workers have been holding what they call an "open-ended strike" outside the hotels since Sept. 19. Room attendants, chefs, front-desk staff and other employees walked off the job after more than a year of negotiations over issues related to safety, workload and job security failed to yield results.

Dozens of staff have paced in front of hotels for weeks, bellowing into megaphones and pummelling plastic buckets with drumstricks hooked up to a sound system to draw the public's attention to their cause.

In her ruling favouring Hotel Georgia on Friday, Supreme Court Justice Nitya Iyer said she found a court order to block the noise was warranted for a number of reasons.

Iyer said evidence from the hotel's private investigator showed the sound has reached 85 decibels more than 80 per cent of the time — a level higher than 70-decibel limit set by city bylaws and loud enough to be harmful to a person's hearing.

Iyer also found the noise largely lasts from 7 a.m. to 7 p.m., save a few lulls, and Vancouver police had already cautioned workers about using sirens, saying it could create confusion and potential safety risks. 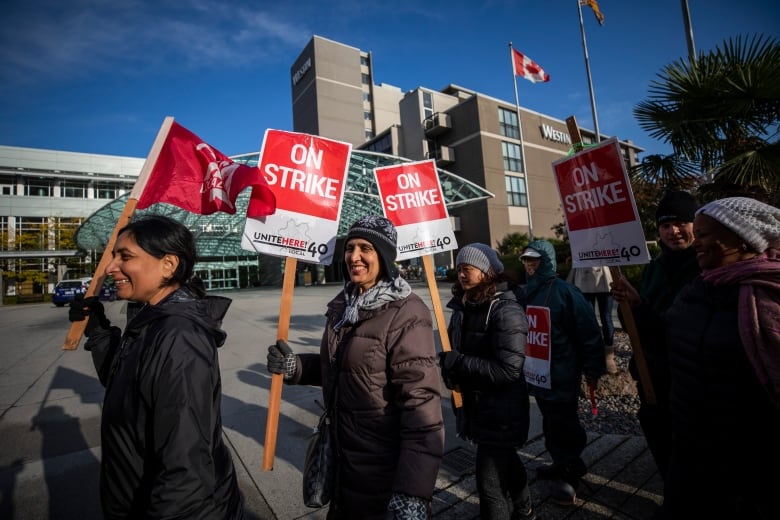 Hotel workers picket at the Westin Bayshore in Vancouver on Oct. 8. (Ben Nelms/CBC)

The Hyatt, Pinnacle and Westin hotels had also claimed striking employees had been trespassing and hindering people, particularly guests, who have been trying to manoeuvre around the hotels.

In her Oct. 3 ruling concerning those hotels, B.C. Supreme Court Justice Shelley Pitzpatrick granted an order banning staff from blocking or hindering people and vehicles moving around the hotels.

The Hotel Georgia did not make a claim concerning interrupted traffic outside its hotel.

All four hotels had asked the court for an order to stop employees from picketing on its premises, but in her ruling, Justice Iyer noted the union has a legal right to put "economic pressure ... on an employer during a lawful strike."

Noise bylaws enforced by the City of Vancouver state no one is allowed to make noise in a public place that "unreasonably" disturbs peace and quiet in the area.