RCMP are looking for witnesses after a man was shot in a targeted, drive-by shooting outside a busy shopping mall in Richmond, B.C., Monday night.

Mounties say shots were fired from a two-door, silver sedan driving through the parking lot of Richmond Centre mall just before 10:20 p.m. PT.

A police statement said a 35-year-old man known to police was hit and hospitalized with serious, but non-life threatening injuries.

The driver of the sedan left the scene. 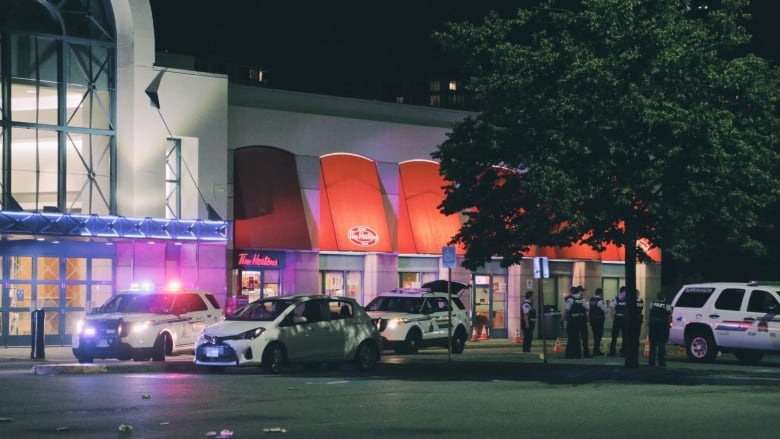 An hour after the shooting, Vancouver police were called when someone found a burning vehicle matching the sedan's description in the 2100 block of Newport Avenue.

Richmond RCMP and Vancouver police are working to determine if the shooting and car fire are linked, the statement said. Anyone who may have witnessed the shooting or who may have been driving in the mall area with a dashcam is asked to call RCMP.

A witness who was sitting inside a Tim Hortons near the shooting scene told CBC News he heard at least three gunshots in total. He later saw the victim being treated by paramedics on the ground before the man was taken to hospital.

A large section of the mall's main parking lot was behind police tape as forensics teams scoured the grounds for evidence overnight.

By Tuesday morning, bullet holes in the concrete walls had been filled with plaster and repainted.